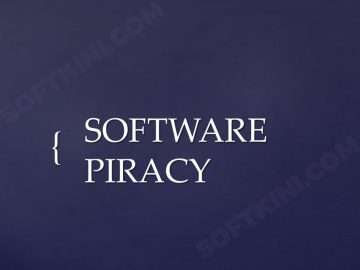 in Computers and Technology on August 2, 2019
We regularly hear reports about the cost to the software industry of software piracy, but are the claims to be taken at face value? Statistics are notoriously biased towards what the author is trying to say.

There are three basic types of software, although these do have their own subsections, as will be discussed later:
Both of these categories contain software that is copied and distributed either free of charge or for a nominal fee. Naturally, the full versions of the software are preferred, but the simplified versions are also to be found, depending on what is available.
Types of Software PirateThis puts our software pirates into two categories of their own:

Composition of the Groups:

So who is to be found in these two groups?

So what are the real costs to the software companies?
In most cases, school and college students would not be in a position to pay the costs for the expensive commercial software they use in technical subjects, and the schools and colleges are not in a position to supply this to them free of charge. Most schools have licenses for software to be used on the premises, but this is not available for the students at home. Theoretically, they will use the computers at school to complete work and practice, but this is generally not possible due to a lack of resources, or classrooms locked because of vandalism. The only way to solve the problem is for the schools to simply distribute the software to their students on the basis of it being only for their use. There is no license and no direct upgrade possible. Generally, although illegal, this system works quite well. Schools try to copy upgrades and patches for their students, mostly successfully. The snag to the matter is that we educate people in that this is a perfectly acceptable practice, despite it being illegal. No-one would think of insisting or even checking that drop-out students erase the software and no longer use it, but this is probably fairly well assured by the fact that they have dropped out in the first place!

One of the best-known software companies has recently started to sell a slightly simplified version of their software in a student package, stating that this is not for commercial use. Naturally, this is being distributed to everybody without regard to their true status as student or not! Nevertheless, it is a definite move in the right direction. Providing an affordable alternative is the first step towards a solution to this problem. The quality is good and it contains all the usual features that are needed.
Other companies also offer free software for student use, but this is in most cases pitifully inadequate and simply not up to the job and no preparation for later commercial practice. It remains to be seen how far the availability of reasonably priced student software will affect sales of the commercial product. One of the factors presumably behind this move is the general attitude that the present software is perfectly adequate and can be used for a length of time without being replaced. Since many software houses have distanced themselves from the idea of upgrade software for older versions at a reduced price, this attitude will probably cause sales of the full commercial software to be limited to new systems, and not as an improvement on older systems.
The new wave of student software is probably intended to bridge this gap somewhat by providing extra revenue. Whether the fears of the others that the production of a student version at a greatly reduced price will cut into their sales of the full, commercial version will prove to be correct or the alternative view that these are complementary products will prevail will remain to be seen.
Benefits of Student Use:

It is undoubtedly true that someone who has trained on one type of software will tend to remain loyal to it as far as company policies allow and that this is a definite motivation to purchase a type of software, hence the policy of the schools is unlikely to be challenged or mentioned publicly. Nevertheless, there is no reason for forcing our youth into criminal activity! Providing a solution that allows people to use these applications during training legally should be a priority for the software houses that will bring some revenue in the short term, and possibly more in the long term. One of the problems in the computer branch has always been the emphasis on short term results and quick profits, but this attitude will have to change soon to allow for these factors.
“Fun ” Use:

Again, the people who use the company software at home for fun cannot really be seen as a risk to the profits of a software company. They would simply spend their time otherwise in the evenings if they did not have this possibility! The matter only then becomes problematic when they begin producing work privately for other companies. This would then definitely be a matter for concern, both for the producers of the software and other companies in the same branch, who have to calculate the costs of software into their prices.
Geographical Factors:

The problem is also geographically different. Most of the software packages originate, at least on paper, from the United States. The prices in Europe tend to be 1.5 to 2 times higher, without considering sales tax of any type, which is generally higher in most European countries. Whilst this may not be of consequence for the run of low-cost software, it is a significant difference when a complex design or technical applications are considered. This price differential is often explained by higher support costs or translation costs, but these factors alone cannot be the complete reason. A change in this policy would probably help to reduce the level of use of copies in the commercial field at least. Splitting software packages into easily-upgraded elements would also enable small companies to purchase what they need immediately and then add the extra features in time as and when necessary.

Software piracy is legally a crime, but it is a crime that is still acceptable in our society. Very little has been done to combat it for a number of reasons. One reason is that it is almost universal amongst users of computers. Many people “need” an application once per year and do not wish to pay the sometimes horrendous cost for the commercial licenses. Companies have made no real attempt to combat it until now, since this is a form of free advertising, and the benefits of having it available to students have been mentioned above. It is only now when the earning curve start to tip downhill that this is seen as a threat to company existence. In reality, it is relatively simple to make something extremely difficult to copy. Impossibility is a dream in the computer world these days!

That criminal activity should be hindered and software piracy is, broadly speaking, theft, is quite correct, but the solution is not just to seek out and punish wrong-doers, but to find a solution for all these groups of people who, for one reason or other, wish to use the software, but cannot, or will not, find the means of paying the present market cost. An imaginative solution to this problem could well be the break-through that a company needs to make itself known in every household, provided the product is correct.